Lowell has tested current draw on a 2.4″ and a 3.2″ Nextion display following questions from constructors over the likelihood of cooking the existing 5V regulator.  With a supply voltage of 5.04 VDC, the 2.4″ display drew 125 ma. and the 3.2″ display drew 110 ma. Both  displays were at full brightness.   While the figures are slightly above those listed on manufacturer’s website, this suggests the 5V regulator should be fine.   If in doubt, add a heatsink!

Kees K5BCQ has now provided installation pics for his AGC kit.  Kees has sold 100’s of these, and the installation concept is worth pursuing for a tidy install on your main µBITx board.

Details for ordering his AGC and Audio Pop Fix boards can be found under his call sign in the files section of the BITX20 IO Groups list.

Jim Sheldon, W0EB notes that the tiny power jumper on the back of the Teensy 3.5 or 3.6 MUST be cut when using external power to the Teensy (from the BITeensio board). Left intact, it is possible to have power being applied to the Teensy through BOTH the BITeensio board AND the USB connection, especially during programming or remote control operation via the USB port. This may cause board power and USB power to conflict with each other and can destroy the Teensy.

The jumper is pointed out on the back side of the pin-out card that comes with every Teensy and it states: “Cut to separate VIN from VUSB, if using a battery charger or external power.” with an arrow pointing to the jumper between the two pads.

Carefully cut this tiny jumper with a very sharp hobby knife to avoid any possible problems.  After cutting the jumper, you will have to power the board externally through the BITeensio card (or other means) when programming or re-programming the Teensy through the USB port.  This holds true for Teensy boards used in just about any application, not just on our BITeensio board.

Ian Lee KD8CEC has released Beta firmware for the µBITx that supports Nextion colour touch screens .  He has also released matching files for installing firmware in the Nextion displays for 2.4″ and 2.8″ screen sizes.   No programming is required to use these displays.

The photo above shows the touch panel display.  Pressing on the screen will perform functions like changing band (up/down), changing frequency, adjusting the Attentuator (ATT), IF Shift and RIT, and going into Split mode.

See Ian’s webpage for details about downloading the various firmware options along with detailed instructions.

Now you can have a look at a partially populated JackAl board thanks to this photo from Jack W8TEE in response to a question about a LA4425 as a replacement to the TDA2822.

The highlighted square in green is the audio amp stage of the JackAl board: a 7W TDA7266M.  Seems like you could really blast the neighbours with that one!

In case you haven’t figured out what the JackAl board is about: it is a supplementary board that hsould be released in the next few weeks by Jack and Al, that adds a Teensy 3.6 processor, and a number of other mods, all on one board.  The Teensy will give the µBITx new features like DSP.

The original uBITx design was published by Ashhar Farhan in March 2017.  A number of people have built a uBITx up from scratch.

Richie KM4TLR has Eagle layout files for the RF sections of the UbitX if you are building one from scratch.  He  took a modular approach, so there are several circuit boards that you could make a UbitX or a single conversion design.   The photos tell it all.

Allison KB1GMX has come up with an improved pop fix based on the one in the v4 board design, originally submitted to the BITX20 list by Joe VE1BWV.

Allison finally got annoyed enough by the pop to fix it.

Allison has added a second diode.   Why? The TX line is relay switched  and relays take milliseconds to physically move contacts. So the second diode to the T/R line from the Raduino is the fast acting “audio kill”. The second diode and parallel resistor is the hold until the relay returns to RX position.

Allison assures us that this fully mutes the rig with no pop, no thump in either transition (from RX to TX or TX to RX).

Michael VE3WMB points out that connecting to VOL-H will kill the sidetone output.   He notes that Ashhar Farhan VU2ESE has his V4 pop circuit connected at M2(R70) with the value of R70 increased to 1K ohms in order to hear the CW sidetone.

An initial report from Mike (callsign not known) of distorted audio on a v4 main circuit board was tracked down to the audio amplifier.  The v4 main board is the new board shipping from HF Signals from around the beginning of June 2018.

Mike solved his problem by bypassing the audio amp and using an output amp as indicated bottom left in the photo above.   You can see that he has also incorporated a mic amp board in his prototype.

We will be watching out (or rather listening out) with interest to see if others are experiencing the same distortion issues from the audio amplifier section.  Hopefully this is just a one-off!

Mike has now fixed the problem with crossover distortion.  It was a biasing issue in the audio final.

Raj VU2ZAP suggested lifting up D15 or 16 and disconnecting one end from the board. Then, solder the center and one end of a 47 or 100 Ohm preset between the two diodes.   Make sure the preset is at minimum. Power up and slowly increase the preset till distortion goes away, while also checking that  Q72  and Q73 don’t get hot when the volume is low.

It is possible that this problem may reappear on other new v4 rigs.

Redoing the biassing as suggested by Raj VU2ZAP solved the issue.  Mike  took a 500 ohm pot and paralleled that with a 125 ohm resistor.   He  says, “The mod doesn’t look so good (LOL) but it works. One of the transistors became warm if the voltage difference due to the pot became too large. I adjusted this while feeling the temp and listening to a CW carrier”.   The setting point was where he observed low/no distortion AND low temperature.

The photo below shows how Mike fixed the issue. 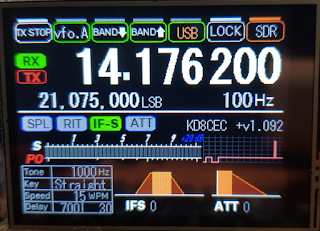 Ian KD8CEC now has a guide to using the Nextion screens on the µBITx on his website.

Michael VE3WMB figured after playing around with the KD8CEC firmware for a while that he  would prefer to have the Main VFO frequency and Mode displayed in the top line, instead of the bottom line of the display and the secondary info (VFO B etc) on the bottom line of his display.

Under ‘User Interface’ of the uBitx Memory Manager application (scroll way down), checking the ‘1/2 Line Toggle’ works to swap the first and 2nd lines on the display.  No coding is required to achieve this.